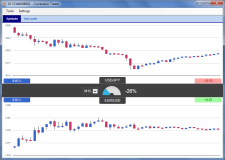 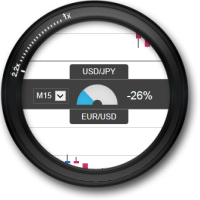 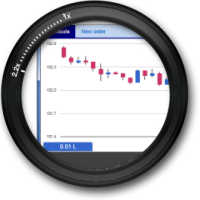 The trader can choose any timeframe for the historic charts - including periods such as M3 or H8 which are not always supported by the underlying platform - and they can then use their judgement, in combination with the current correlation, to watch for tradeable differences in the relationship between symbols. For example, if the correlation figures show a strong relationship between EUR/USD and USD/JPY over recent trading, but the latest price movements suggest a break-down in the relationship, then that could constitute a trading opportunity.

The Correlation Trader app can also be used just as a simple way of displaying two price charts next to each other, along with the current open position and profit for each symbol.

Correlation can have a major effect on trading risk. For example, if EUR/USD and USD/CHF have been strongly correlated, then a trader who had open positions in both would have seen very similar profits on each position. In effect, the trader did not have two positions; they only really had one position. (They will either have seen similar profits or losses on each position, or they will have seen matching profits and losses which largely cancelled each other out.)

It is generally advisable for a trader to minimise the correlation between their open positions. Otherwise, they are either trading the same price action twice over, or they have two positions which largely cancel each other out.

FX Blue Labs can provide videos about each app. Broker clients can either use generic un-branded videos, like this example, or can commission branded versions which FX Blue Labs will arrange and pass on at-cost from the video company.